I want to thank Daniel Franke and Cedric Kiefer for letting reinterpret the musical accompaniment to their original work, entitled unnamed soundsculpture: embodiment of sound (2012), and I want to acknowledge onformative.com for facilitating this collaboration.

For more information about the production of the film, go to:
onformative.com/work/unnamed-soundsculpture

I want to thank Bryn Hewko for permitting us to work with his 360° film, entitled CrawlSpace (2016), and I want to acknowledge the assistance of the New Media Department and “AGILITY” at uLethbridge. New Media supplied us with an Oculus Rift and AGILITY donated several uLethbridge-branded Google Cardboard for the participating audience.

The performance begins after a one-minute introduction.

I want to thank David Schlatter for permitting us to work with his film, entitled Seldom Somber (2016), and I want to acknowledge the musicians of “Inside the Baxter Building” for facilitating this collaboration and inspiring me with their own musical setting of Seldom Somber.

ICE “in rehearsal” – making music to film, Seldom Somber, by David Schlatter. Come to the concert on 8 April, Lethbridge [Canada] 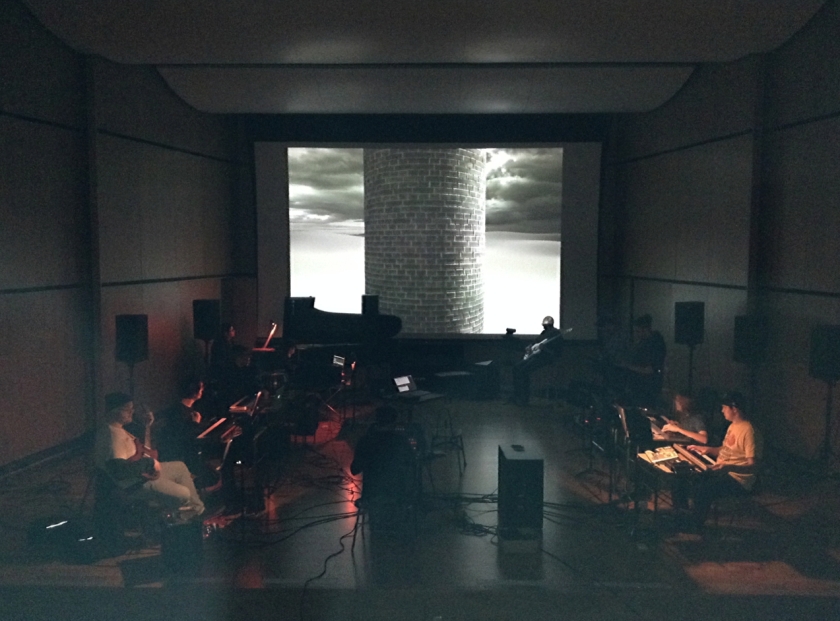 Composition is an art form that is constantly in flux, constantly changing and reshaping itself. Composition can be influenced by the past, present and future equally. It is one of the greatest art forms because it is nearly infinite; with each composition being differentiated by Notes, rhythm, timbre, and technique (the last of which is ever-changing with new techniques being invented constantly). The difficulty with composition comes from a very narrow concept that we are hardwired with of what makes music sound “Good.” It is difficult to make compositions that sound “good” that are still original (many of the best know songs all follow the same chord progression eg. VIDEO ). But allowing ones self to be limited by this notion of good sounding music completely eliminates the possibility of growth and advancements in music.

This is where the urgency and importance behind electro-acoustic music can be most felt. Players and composers with an interest in Electro-acoustic music are most likely already consumers of “experimental” music. We as electro-acoustic musicians are not limited to four chords for our expression, we are not even limited to conventional tonality or the inherent need for notes. Electro-acoustic music is a blank canvas where anything can be an instrument and any instrument can make any noise. A synthesizer a conventional instrument based off of the keys of the piano, through a variety of digital codes programmed into the synth it’s self, and through different plugins and setting of the computer you are running said synth out of can be anything, a guitar, a glossy pinging, an unearthly rumble. Even for instruments that are not electronic in the same way as the synth you can still treat affect them. The possibilities are endless because there are constantly more parameters that you can add, subtract or change.

This makes composition of Electro-acoustic music admittedly more complex and time consuming but over all more rewarding. When you begin your composition your first step does not have to be “what is my first note?” you can view it from a holistic viewpoint. Your first consideration can be what sound do I want my instruments to make; once you have dialed that in then it is easy to look at your composition and asses what other elements do you want to add. Do you want your instruments to juxtapose, or sound well together? Do you want your sounds to be constant/brief, warm/cold, in the foreground/background, distorted/clean? All of these parameters are controllable by you and the technology at your fingertips.

Electro-acoustic music is also an art form that is very conducive to composing as a group. The benefit of the group is that rather than only having one mind perceiving and creating the sounds that are wanted/needed you have multiple and therefore you have a broader palate to draw inspiration from. It can also act as a needed injection of creativity as it is easy to become bogged down and in some ways it is possible to become paralyzed by possibilities.

Composition of Electro-acoustic music is a freeing experience. There are no boundaries, and no set template to base your work off of. It is pure expression and it is endless.

Last April, 2015, Integra Contemporary & Electroacoustics presented their final event of the academic year, entitled Traffic & Waves. Our concert showcased the hard work (compositions and developed improvisations) of the members of the ensemble: Digital Audio Arts students from the University of Lethbridge. In addition, we included Steve Reich’s Clapping Music, Tines Quartet by Jeff Morton and importantly, we interpreted Rolf Boon’s WAVES, which we present in this video.

As much as we might have learned about compressors, reverb, plug-ins, quantization, etc, it is important to answer a question that is simple yet vital to any producer of music — what is it that makes a successful musical production? Even more interesting, is production solely about dominating the art of aural manipulation via knobs and faders, or does it have a certain magic of its own?

What I propose with this idea is that music production is, in fact, an independent entity of its own that achieves its maximum potential when one accepts the challenge of utilizing not merely as a tool, but as an artistic outlet, with all the implications that accompany the creation of any piece of art.

It is noteworthy to mention that although I present you this viewpoint through a subjective conclusion, I shall expose you some of the objective ideas that lead me to construct my judgement on this matter.

The first of these ideas has to do with a very interesting linguistic distinction that was underscored to me some time ago — the differentiation between an artist and a craftsman. “Curious”, you might say, “but what of it?”. Well, what I’m trying to illustrate through this is that the distinction between the two is that a craftsman is employed in order for him or her to perform an action that was learnt through hard work and was turned into a skill with experience. While on the other hand, the title of artist is instinctually connected to the culturally shared idea of art: a vehicle to connect oneself with that which brings catharsis and deliverance, sometimes even acting as catalyst for radical changes either to individuals or to an entire community.

The point that I am trying to make with this is that to approach production thinking of oneself as a creator and enabler of artistic content can be much more fruitful to those of us who might perhaps still be too humble when considering their involvement in the creative process, maybe even thinking that they are just there to make someone else shine brighter. This attitude does not necessarily mean that you will perform your job poorly, but I assure you that most of the artists that have inspired plenty of people (including you and me) into joining this industry will most likely owe part of their success to a music producer that was successful in developing and polishing their artistry and their message. A good example of this could be the relationship between Michael Jackson and his producer Quincy Jones, who together created albums such as the immortal record Thriller, which is still a major keystone in the musical edifice of Western culture today, after being released a little over thirty years ago.

Whatever one’s opinion might be on records such as Thriller, what is objectively undeniable is their impact on our society. And let me clarify, this phenomenon is not secluded to pop culture, as not too long ago we were able to witness a sort of rise of anti-heroic personas that openly challenged pop standards (I mean, we’ve all heard of Marilyn Manson at one point in our lives, I’m sure, whether as the artist or as the public figure).

The reason artists and their producers achieve this success is not only because of the material that they create, clearly, but instead — their approach to their own creative process and the kind of goal that they establish for their endeavour.

The bottom line is that the previous two artists and many, many more have become successful in their profession not because they achieved to create “good music” (whatever that might be), but because their endgame is not to not only engage in the creation of music, but to *drumroll* conceptualize the artist’s ideals inherent in their work.

And what on Earth does that mean? What it means is that punk would not be punk without the ever-present rawness of their recordings, which matches with the genre’s message. Of course it does not sound like one of Max Martin’s Britney Spears hit records, because it would make no sense at all, and viceversa.

As producers, our goal is not to serve the artist, but to serve the necessities of the concept that they are exploring through their opus. This concept’s value system and moral code have to be rendered tangible through the producer’s skill to turn an artist’s idea into a banner that the audience might identify themselves with.

My viewpoint, ultimately, is that a successful musical product can only be achieved through a thoroughly coherent and wholesome concept, especially since nowadays the musical experience is becoming increasingly multimedia. The successful creation of this concept not only relies on the technical skills that one might possess, but is also a direct result of a much more cerebral, intellectual process that most likely shall occur before opening your DAW.

The title of producer implies someone who transforms an artistic work into a marketable product ready for consumption. Yet let us never forget that those who have become major figures in the music production business are not those with the grandest ability to press buttons and tweak audio in order to make their clients sound as they do. The most successful producers are those whose approach their creative process in the same way an architect approaches the use of space. In the same way a poet approaches language. In the same way a painter approaches colour. And what is this way? To be fully sure not only of one’s capacity to perform the task correctly, but to be sure why one’s doing it instead of something else.

Music production has gifted humanity the opportunity of listening to music like it has never been heard before. It is in our hands to hone our technical capabilities as well as our intellect so that we may keep enabling the creation of content that can find its own place, voice, and purpose within our global culture.

Follow ICE ensemble | Integra Contemporary & Electroacoustics at the University of Lethbridge on WordPress.com

ICE ensemble | Integra Contemporary & Electroacoustics at the University of Lethbridge
Blog at WordPress.com.